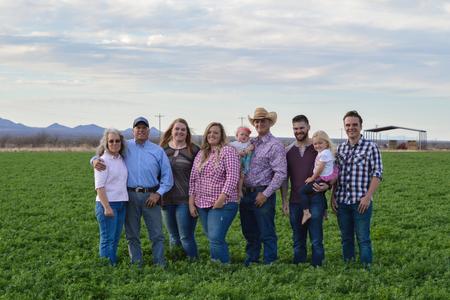 Our kids are grown up and starting lives of their own. Our granddaughters enjoy helping out on the farm when visiting, especially collecting eggs. Besides the farm, Jackie works for Cochise County. Nathan works our farm and does custom work on neighboring farms and is still involved with the family businesses in Sierra Vista. We have expanded our operation beyond meat. We grow alfalfa hay and sell it in small and big bales. In 2017 we started Frontier Kitchen where we make and sell pasties, bread, and broth. We are expanding the farm to grow more hay and have planted a pecan orchard on the "south" 40.

We're Cochise County natives. Jackie was raised on a ranch outside of Bisbee and Nathan grew up in Ramsey Canyon. We live  on and operate our farm in McNeal, Arizona.

We started in the Hereford/Palominas area raising registered Limousin cattle. In 1997 we added sheep to our operation and realized there was a need in southern Arizona for good tasting lamb. Being somewhat lazy and too busy with other things, we decided to go with hair sheep (they don't require shearing) and settled on the Dorper breed. Dorpers were developed in South Africa and thrive in conditions worse than what we see in SE Arizona.

In 2001 we moved to our place in McNeal which offered better soil for irrigated pastures, more native pastures and less crowded conditions (the Palominas area was getting too crowded). After experimenting with different grasses, we decided to not fight the "native" bermuda grass invading our irrigated fields. Instead we fostered its growth since Dorpers thrive on it and will get too fat if we don't watch them. We added pigs to our operation in 2005. We raise Durocs and Idaho pastured pigs. They love getting fat on alfalfa and a grain-based diet as well as kicking a ball around.